When alien species are mentioned, you may think that they come from another planet. In biology, however, we use the term alien, or non-native species for organisms which have been transported by man to a region where they did not occur naturally. Non-native species include a wide variety of organisms: viruses, fungi, plants and animals, and they can also differ in the pathways of introduction. Because of this, it is not always esasy to identify non-native species as such. In recent literature, the definitions which are agreed in the context of the Convention on Biological Diversity are used. These definitions are somewhat more extensive, but they are most suitable for the variety of non-native species. Therefore, we use these definitions on this website as well:

From introduction to invasive

The introduction of non-native species is a direct consequence of the mobility of people and the transport of goods. While this trade is ongoing for thousands of years, it has continuously increased in the last century. With it, also the number of non-native species increases, which reach new regions with the aid of human transport. The impacts of these non-native species are presented on the next subpage. First, let’s have a look at the stages through which species pass when they establish themselves in a new environment.

Every year, hundreds of new non-native species are imported in Europe, both intentionally and unintentionally. Not all of these become invasive. In fact, most of them enter unsuitable living conditions and do not survive, or they cannot reproduce because too few individuals are imported and they do not find a potential partner in the new environment. Some species, called casual alien species survive in the new environment for a considerable time, either because of a long individual lifespan or because of occasional reproduction.

Some alien species do not only survive in the new environment, they gradually adapt and start to reproduce (either sexually or vegetatively). Non-native species which maintain populations without further human assistance are called naturalized species. These categories of alien species are defined as follows:

This text was prepared in the framework of project Tuja 2, which was financially supported by the Swiss Contribution to the Enlarged European Union.

Alien species, which did not cross the border

Nase (Chondrostoma nasus)  is an native fish species in the Danube catchment, which includes the Slovenian tributaries Sava and Mura. During 1960−1965 it was brought to river Vipava for sports fishing. Vipava is naturally separate from the Danube catchment and flows to the Mediterranean basin. For Nase, it would not have bene not possible to reach the Mediterranean catchment without human assistance; therefore it is an alien species in river Vipava. In the Mediterranea catchment, another species evolved with a similar lifestyle, the South European nase, (Protochondrostoma genei). In recent years, South European nase has only been reported from the Goriško brdo region. From Vipava there are only historical data and it is presumably locally extinct. Competition with the alien nase likely contributed to the local extinction of South European nase. Because of this ecological impact, we can classify nase as an invasive alien species in Vipava. This means that the term alien species is not necessarily only given to species which originate in other countries.

Starting in 2017, measures for the conservation of the critically endangered South European nase are implemented in the framework of project LIFE for LASCA, which is led by the Fisheries Research Institute of Slovenia, in cooperation with partner organisations. >> to the official project page.

In Slovenia, we can encounter five species of touch-me-not (genus Impatiens). Only one of these is native, the Western touch-me-not (Impatiens noli-tangere), the other four are alien species in Slovenia.. policemans’ helmet (Impatiens glandulifera), which originates in the western Himalaya’s, was cultivated in gardens in the early 20th century, and it is popular with beekeepers because of its late flowering season. The first documented findings in the natural environment are from the 1940’s, since then the species has rapidly spread along rivers. Today it occurs widespread and common in large parts of Slovenia, except for the submediterranean climate zone. It is especially common along rivers and streams, where it is locally entirely overgrowing the shores to the cost of all native species. Because of this, it is an invasive alien species in Slovenia.

Besides these, we can find the  small-flowered balsam (I. parviflora), which is also an invasive alien species in Slovenia. Because of its smaller size, it is less conspicuous, but it is locally covering the forest floor, where it excludes native forest herbs.

Increasingly, Balfour’s touch-me-not (I. balfourii) is found in various natural habitats, which is therefore classified as a potential invasive species and include in the Slovenian alert list of alien species. The fifth species, garden balsam (I. balsamina) is for now restricted to gardens and considered as a non-invasive alien species. 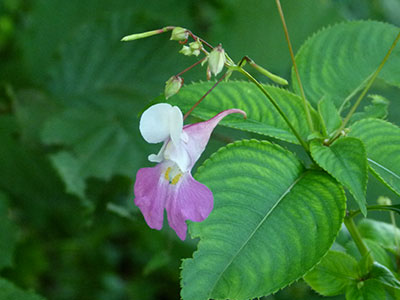