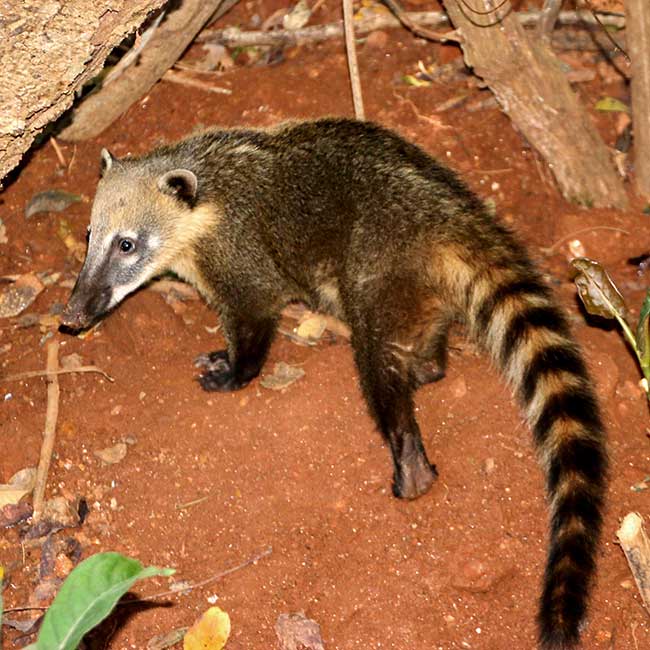 PATHWAYS: escape and release from captivity

DESCRIPTION: A cat-sized mammal (head-body length 40–65 cm, with a tail of 30-70 cm). The tail is slender with approximately 10 dark rings along its entire length. The front limbs are short, the hind limbs longer. Snout conical and black, grading to brown with white spots close to the eyes. The fur is usually light to dark brown.

STATUS: Established on Mallorca until at least 2015, but eradicated. Single escaped individuals have been recorded in other European countries, including in Slovenia. Unlikely to survive in areas with severe winters.

SIMILAR SPECIES: Confusion is possible with raccoon (Procyon lotor) due to its ringed tail. The raccoon has a longer-furred tail, a less elongated snout and a black facial mask around its eyes. The white-nosed coati (Nasua narica) which is occasionally kept in captivity, is more similar but has a pronounced white facial pattern with a broad white band around its snout.

NOTE: this species is included in the list of Invasive Alien Species of Union concern (the Union list) of Regulation (EU) 1143/2014. The species included on the Union list are subject to restrictions and measures set out in the Regulation. These include restrictions on keeping, importing, selling, breeding and growing. Member States are required to take action on pathways of unintentional introduction, to take measures for the early detection and rapid eradication of these species, and to manage species that are already widely spread in their territory.